No, we're not going to warp. This is a composite image generated from several sub-frames taken of the Geminid Meteor Shower this past December 14th. I set up the camera on the Vixen SP and pointed it at Gemini. Out of 276 30-second exposures, meteors appeared on only six images. 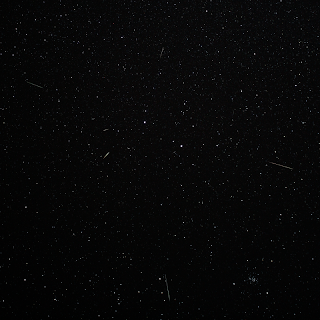 Meteor showers usually occur when the Earth moves through a cloud of particles that have been cast off by a comet. The Geminids were assumed to be from a comet, but no comet was known that could have produced them. However, In 1983 asteroid 3200 Phaethon was discovered and shortly thereafter identified as the source. It may be a chunk that was broken off of a larger asteroid, Pallas. The particles that we see as meteors may be debris left over from a collision or other breakup event.

The shower was actually quite active--despite the lackluster appearance of meteors in the image above. I stopped counting fairly early on, but saw dozens over the course of the night.

Meteors can appear anywhere in the sky, but their trails point back to a small area called the radiant. This is the point in the sky that corresponds to the direction in which the Earth is moving and plowing through the debris field.

The two bright stars near the center of the image are Castor (left) and Pollux (right). The radiant is located just above Castor. Gemini extends to the upper-right of the image. The cluster of stars to the lower-right is Messier 44, the Beehive Cluster.
Posted by RoryG at 7:31 PM 1 comment:

The Rosette Nebula (Caldwell 49) lies in the constellation Monoceros, the Unicorn. It is a faint emission nebula that surrounds open cluster NGC 2244 (Caldwell 50). Both the nebula and the cluster lie between 5,000 and 5,200 light years away. At that distance, the Rosette Nebula is about 100 to 130 light years in diameter. The visible part of the nebula in the image below covers an area slightly larger than the diameter of the full moon, but is so faint that it requires either a very large telescope to see it visually, or long-exposure images.  The Rosette's name comes from the nebula's resemblance to a decorative emblem.

The stars of NGC 2244 are young--only about four million years old--and extremely hot. The pressure of their stellar winds is clearing out a space within the nebula. This action also compresses nebular gas along the outside edges of the cleared space, which triggers additional star formation.

The Rosette Nebula is the most visible part of the much larger Rosette Molecular Cloud.
Posted by RoryG at 8:48 PM 2 comments: