These are images of a Moon Halo. Halos like this are caused by tiny ice crystals in high clouds. The crystals act as prisms, bending the light at various angles to produce a circle of light around the Sun or Moon. When the conditions are just right, ice crystals can produce multiple halos and complex shapes.

The crystals also separate the colors of the moonlight, much like those in a rainbow. While this may not be apparent to the naked eye, a camera taking a long exposure can pick up the faint color bands.

This first image shows the Moon and part of the halo more-or-less as it appeared to the eye. The main difference between what I could see with my eye and what the camera picked up was the presence of color in the halo.


The odd shape at the top of the image is the result of light reflecting within the camera lens assembly. Stars are visible through the clouds.

This is the same image with slightly enhanced contrast: 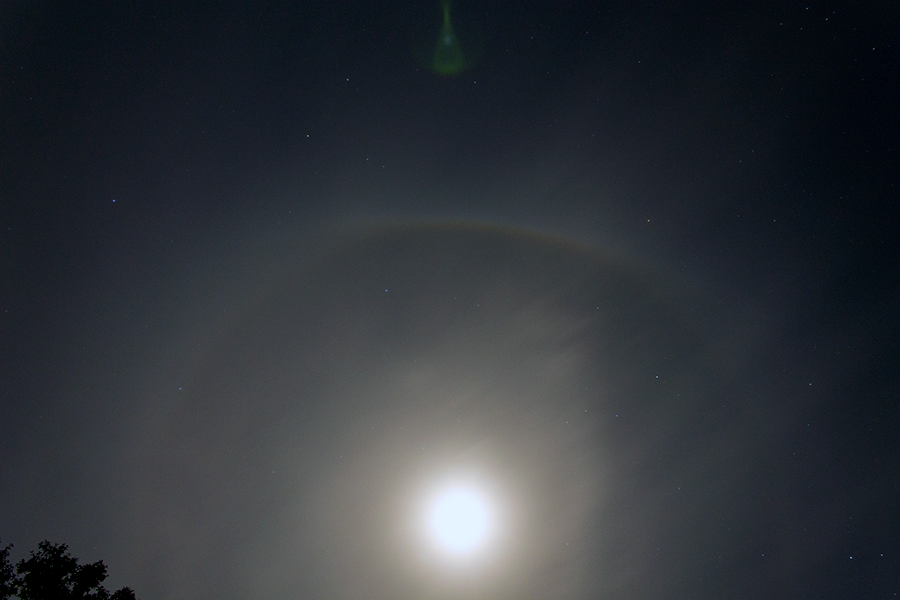 There are actually two arcs visible here. The brighter halo forms a circle around the Moon. Another arc, slightly flattened as if to form an oval, is visible intersecting with the top of the circle. If this second halo was complete, then the whole scene would have looked like an eye!
Posted by RoryG at 7:30 PM No comments:

I was telling Clayton, my astronomy pal over at Clayton's Wanderlust for Stardust, about the difficulties that I was having in processing my recent image of the Eastern Veil Nebula. He asked if he could try working with them in PixInsight and Photoshop. The results are amazing!

The colors of the nebula and the stars are more vivid, and the detail is sharper. These images were produced with the same set of data in my previous post!

This has convinced me that there is yet more that I can extract from my modest equipment. I'm looking forward to learning some new image processing techniques!