Clouds here at the ObservaRory spoiled much of the show during the 2016 Perseids. I set up the camera sometime after midnight and had it take 30-second exposures until the battery ran out. Despite the clouds, though, it caught images of several meteors, as well as a few other sky fairies.

The image below is my favorite. It was taken sometime near the end of the run. A thin layer of clouds covers much of the sky. The Pleiades is on the right, and Capella--appearing large and fuzzy due to refraction caused by the clouds--is at center bottom. The tree in the lower-right appears blurred because of the wind. 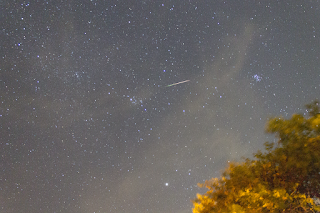 This little meteor originated below and left of the Double Cluster in Perseus. 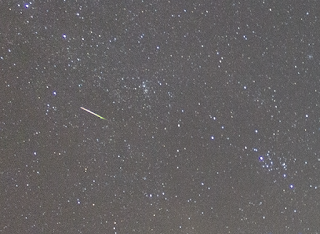 One of the streaks in this image is a meteor, but the other is a satellite. Guess which one! (Answer below.) 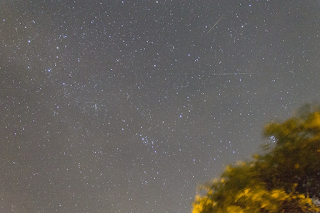 While both appear to be good candidates for Perseids (they seem to originate from the same radiant), the lower streak is actually a satellite. Bright meteors show up in images as multi-colored streaks. They also only appear in one image because they move across the sky so quickly.

Satellites, on the other hand, are usually white and move slowly, often appearing in two or more images.

The animate GIF below is composed of two frames that were taken during a satellite flare, possibly from an Iridium satellite. The fuzzy object at the top is the Andromeda Galaxy. The frames are aligned on the object. Each frame is 30 seconds long, with a 5-second gap between. The motion of the background stars represents the rotation of Earth during the 65-second period.

Milky Way on a Country Road

There is a region north of Huntsville, Texas where the sky is considerably darker than most of East Texas. It measures from a low to a high 3 on the Bortle scale, and is roughly located between the Old Spanish Road (OSR) to the south, Palestine to the north, Interstate 45 on the west, and Lufkin on the east. A portion of it is south of the OSR, not far from my house.

My son and I drove through part of this area last February doing a light pollution survey. I was really impressed with how the sky looked there, and decided to revisit it during the summer. So, the other day we drove out to a spot on the side of a road somewhere between Weldon and Lovelady, about 30 minutes from our house. The view was spectacular!

The Milky Way stood out with very high contrast compared to how it appears at the ObservaRory. It's not quite X Bar Ranch dark there, but it is still very good. Below is a composite image of photos that I took with the DSLR and a zoom lens.

Below is an enhanced version that brings out the stars and dust lanes:

The right combination of time, energy, and weather conditions still elude me lately. I haven't done much more than peek out the window at the stars now and then. That gave me an idea, however.

Last night I set up the trusty DSLR at one of the back windows and started making a time-lapse of the sky.

But I didn't account for last night's high humidity. The window fogged up shortly after the sequence was started, and I didn't discover the problem until the morning. There weren't enough frames to make a decent time lapse.

Still, there were a few pictures that I thought were pretty.

Below, the constellation Scorpius, containing the bright red star Antares, dominates the center of the image. Mars and Saturn are visible in the upper-right. Ptolemy's Cluster and the Teapot asterism are on the left. There are clouds, mostly above the treeline, to the right. The Milky Way is visible at the top, just to the left of center. The image at the end of the post has labels.

To the ancient Greeks, the star Antares appeared similar in color and brightness to Mars, which they called Ares. The name Antares means, "rival to Ares" or "equal to Ares." Mars is approaching Antares in the sky, and the two will be less than 2 degrees apart, forming a nearly straight line with Saturn, on August 24, 2016. 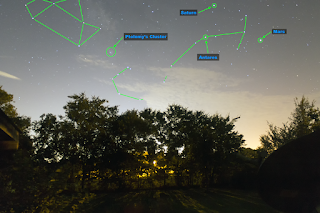