My wife surprised me with an early Christmas present: a new lens for the DSLR. It's a 75mm-300mm zoom lens, so basically it is a small telescope in my view. It's not perfectly suited for the task, but that doesn't stop me from trying to use it for imaging. Below is my first attempt at using it for a wide-angle shot:

This is a composite of several exposures ranging from 10 seconds to two minutes.

The Sword of Orion is prominent in the upper-right. This complex of nebulae is composed of Messier 42, Messier 43, and the Running Man Nebula.

The Horsehead Nebula is located left of center. The horse's head is actually a molecular cloud, or dark nebula, situated in front of an emission nebula from our persepective.

The Flame Nebula, an emission nebula, is located to the left of the Horsehead.

The three bright stars that form a line from the Flame/Horsehead to the upper-left are Alnitak, Alnilam and Mintaka. They form the Belt of Orion.

Reflection nebulae Messier 78 is located in the lower-left of the image. I hope to get some better images of M78 in the near future.
Posted by RoryG at 8:15 AM 1 comment:

I've been experimenting with taking wide-angle long exposures with the camera mounted on the Vixen SP. Here is an image made in September 2012 of the Milky Way, with the constellation Cygnus on the left, and the constellation Aquila on the right. Prominent features include:


This image also encompasses part of the area that is being studied by the Kepler mission.

Note, too, that the Great Rift appears less dark on the right. This is due to light pollution from town.

The following was a test image made after focusing the camera on Jupiter during a brief imaging session in early November 2012. Jupiter is the bright star near the center of the image. The reddish star to the upper-right of Jupiter is Aldebaran, in the constellation Taurus. Also visible are star clusters NGC 1746 (which is actually an asterism partially composed of two open clusters), NGC 1647 and the Hyades cluster. The vertical streak is the light trail made by an airplane.

After focusing the camera, I pointed it at Messier 31, the Andromeda Galaxy:

My primary goal was to image the area surrounding the constellation Perseus. My time was running short and Perseus had just cleared the trees, so I pointed the camera in that direction and got enough subs for the image below. Some of the items visible here are the Double Cluster (above and right of center), and the Heart and Soul nebulae (the faint red patches below and left of center):

Star Trails to the South!

This is the view to the south from my place. The glow in the sky is mostly from the city of Huntsville, Texas. The contrast has been enhanced a bit to eliminate some of the sky glow, but it's awfully hard to compete with all of those prisons and retail centers.

The stars of the constellation Sagittarius dominate the lower half of the image. A few aircraft trails are visible--mostly air traffic from Bush International Airport (IAH). The two short, bright streaks near the top (center and near the left edge) are probably satellites, but I have not been able to confirm this.

This image is a composite of 111 30-second exposures. 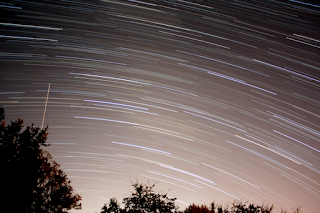 Star Trails to the North!

The sky was beautiful last night! The Milky Way was bright, and there were tons of stars! I didn't have time or energy to set up the telescope, so I did a quick star trail before the moon rose.

The object at the bottom of the image is the roof of my deck, faintly reflecting the light of a sodium lamp several hundred feet away through the trees. The colors have not been enhanced. I adjusted the contrast a bit to reduce the sky glow. This is a composite of 163 30-second exposures.

The straight lines that criss-cross the starfield are the trails of aircraft. Also, there are several hot pixels scattered about the image because I forgot to take dark frames. 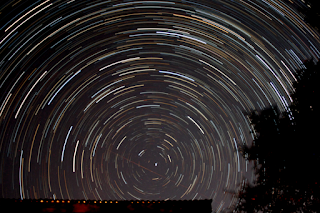 I imaged these two objects while watching the Perseid meteor shower the other night.

Messier 11 is an open cluster in the constellation Scutum. It's common name, the Wild Duck Cluster, is derived from a triangular formation of stars in the cluster that supposedly resembles a formation of ducks. I don't see it. All I see is a sea turtle. Or Robin Hood.

Messier 27, the Dumbbell Nebula, was the first object that I imaged with the Epsilon-200. I was able to get more of the red to come out in this version:

August 31, 2012, is a Blue Moon, so I thought it would be appropriate to do one of those "colors of the moon" images. The weather here has been a little unpredictable lately, so it's anyone's guess as to whether or not the Blue Moon will be visible. The sky was clear the night of the August 1 full moon, so I took the opportunity to image it, instead.

The moon's colors are very subtle not and easily discerned by the human eye. A little image enhancement brings them out.

A negative image often brings out subtle details that are usually harder to see in normal photographs. Astronomers use this technique to spot galaxies, nebulae and other dim objects.

And here is a "normal" image of the moon, with only slight contrast enhancement:

I finally got some time on the Takahashi Epsilon-200 the other night. The NJP mount was in need of some minor repair and readjustment. With the help of a couple of my astronomy pals we got everything put back together, balanced and aligned. The mount did very well, although I think the autoguiding needs a bit more tweaking.

Messier 15, in the constellation Pegasus, was one of the few globular clusters that night that were bright enough to shine through the moonlight.

On June 5, 2012, the planet Venus passed directly between the Earth and the Sun for the last time until the year 2117. The weather here was favorable for viewing the first half of the transit. It was an amazing sight, and I'm very happy that my family and I got to see it!

Mike Prokosch and I set up our scopes on the grounds on the Texas Prison Museum and invited the public to come see the event. Here are some images that I took with my setup:

I used the Coronado PST and Meade DSI camera to capture these images of the Sun in the Hydrogen Alpha wavelength.

These image were taken with a Canon EOS Rebel XS (1000D) attached to an Orion ShortTube 80 equipped with a solar filter. 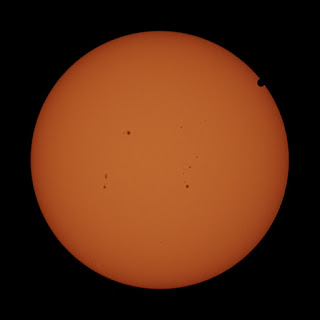 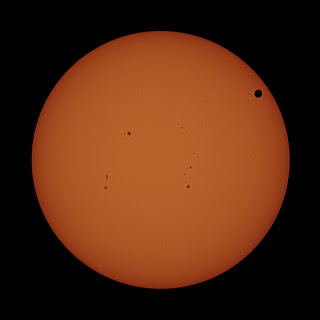 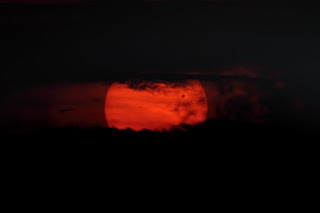 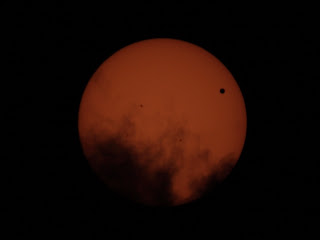 The following three images are single frames that captured other items besides the Sun and Venus. The first two show doubles, which gives some insight into how the Meade DSI camera works:  it scans the odd- and even-numbered rows separately, allowing fast-moving objects to show up twice as they move across the field of view. Each of these images has been processed to make the transiting objects appear more solid. 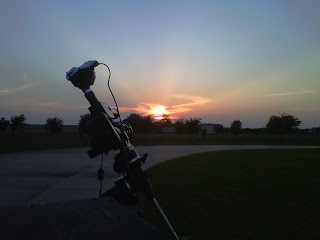 I had a little time this afternoon to practice solar imaging--probably my last attempt before the Venus Transit, next week.


Here is my imaging setup. The Coronado PST is piggybacked onto the ST80. A solar filter on the ST80 allows me to take visible-light images of the Sun with a DSLR. 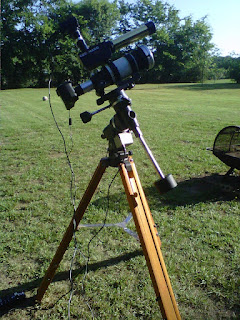 I'm always trying to think of ways to improve my imaging techniques, especially given the fact that the equipment that I am using is not well-suited for astroimaging. I have four major limiting factors:

All of these issues could be solved if I had more money in the astronomy budget. But, since that won't be improving in the foreseeable future, I try to make the best of what I have. (Which I've very thankful to have, by-the-way!)

The images below mostly represent failed attempts. One or two may look pretty, but I assure you that something in the process did not work as I had intended. Regardless, I learned something from each, as described below.

I avoid using my ShortTube 80 for lunar and planetary imaging--the chromatic aberration is just too severe to get a sharp image. It comes with a special lens cap that permits the scope to be stopped down to about f/9, but even at that focal ratio the scope still produces a blurry image on bright objects.  The Orion SkyGlow filter seems to mitigate the purple fringing around stars a little, so I thought I'd see how well it performed with an image of the moon. The results were far from impressive, as the following image illustrates:

I separated the image into its red, green and blue components. It was out of focus in red and blue, but pretty close to focus in green. Here is the green channel in grayscale:

One night back in January 2011 I imaged NGC 2264, the Christmas Tree Cluster and Cone Nebula, hoping to improve on an earlier attempt that I made with the Epsilon-200. I took a few test shots and wasn't impressed with the results, so decided not to continue. Recently, I was going through my imaging archives and came across the test images and decided to see if I could salvage something out of them.  Here is the result:

The individual images from which it was composed were VERY noisy, and there wasn't much nebulosity. Running the image through a noise reduction filter a couple of times and resizing the image helped to hide the noise. There are a lot of stars, and the dark nebulae are fairly easy to identify. Perhaps I shouldn't have been too hasty to judge the test frames. If I had taken more images then I might have gotten a decent result despite the limitations of my imaging equipment (i.e., lack H-alpha sensitivity).

Below is the earlier image that was taken with the Epsilon-200:

Finally, the image below was taken while experimenting with visual solar imaging using a full aperture solar filter on my ST80: 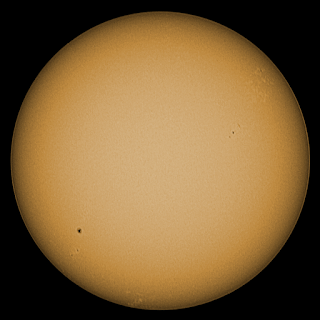 Focusing on the Sun is tough! The image constantly shimmers due to the atmosphere being heated by solar radiation, and the image in my DSLR is rather small. Add in the effects of CA, and getting a sharp image is nearly impossible. This image was heavily processed to bring out the surface granularity and the details around the sunspots. 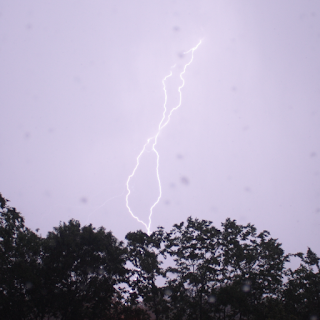 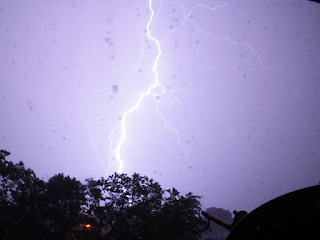 Messier 95 is a barred spiral galaxy 38 million light years away in the constellation Leo. A supernova was discovered in the galaxy's outskirts on March 16, 2012. Despite its great distance, astronomers may have found the pre-nova star in a Hubble image that was made a few years ago. Here is an image of M95 that I made early in the morning on March 24, 2012: 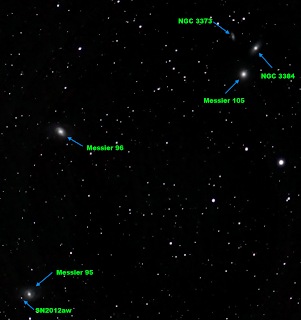 I'm experimenting with imaging prominences. Here are a few images that I captured this afternoon.

Each of the following two pictures is composed of a long-exposure image that was used to catch the prominences, and a short-exposure image for the Sun. 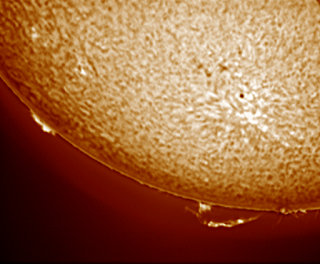 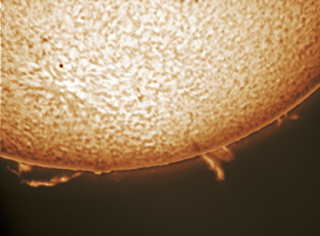 Here are a couple more shots, just for fun: 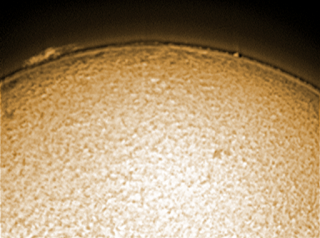 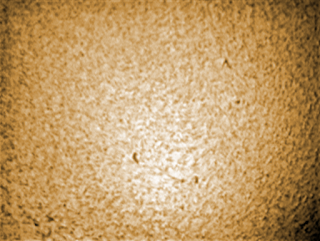 Here are some shots of the March 12, 2012 Venus/Jupiter Conjunction. They were behind the trees from most of my yard. I thought they made the trees look a little spooky, like they were watching me... 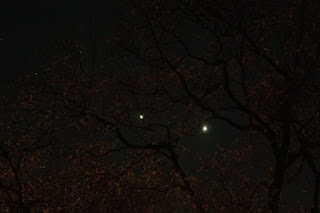 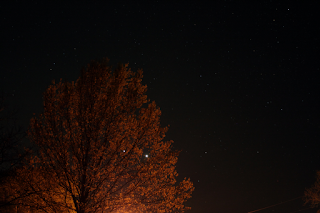