This is a rough animation compiled from individual frames that I took during the August 21, 2017 eclipse from Huntsville, Texas. The images were captured using a Mallincam SkyRaider AG monochrome camera mounted on a Coronado PST.  The images were processed in RegiStax 5.1 and Adobe Photoshop CS6.  The black and white images were colorized.

There is a sizable gap in the animation where I paused imaging while my neighbor's lawn was being mowed by the landscapers.  The mower kicked up a great deal of dust!

Activity around the sunspots and the rotation of the Sun are evident through the video.

I was out in the yard at 5:15 AM, accompanied by my very confused cats, to set up and polar align the Vixen Super Polaris mount.

My younger son stayed home from school to view the event (and play video games). The sky looked good. The equipment was ready. We went to the store to buy fresh batteries for the mount, then...

Yes, I wrote it. The "C" word. The bane of astronomers, both amateur and professional, everywhere.

I'd been looking forward to this day for years. In fact, I was already disappointed that I wouldn't be able to travel to see totality. But this...

It's not unusual to have early morning clouds during humid, East Texas summers. But the timing...

But we amateur astronomers are an optimistic bunch. In fact, astronomy is one of the few things in which I embrace optimism to any degree. It's not in my personality to expect the best. However, I've been known to sit under overcast skies with the belief that, eventually, they will part and the skies will be clear. Sometimes I'm right. Too often, I'm wrong.

Still, I pushed forward and finished setting up the rig.

A couple of minutes after first contact (the point at which the Moon begins passing in front of the Sun), the clouds started to break up. I won't say that it was smooth sailing from that point forward, but as the day progressed the clouds became less of an issue.

The neighbor's landscaping crew, however, chose today to mow her lawn. Imaging had to be shut down temporarily to protect the equipment from dust.

I couldn't get the ST80 and PST to play nicely together, so I just concentrated on using the PST.

Most of the images made with the PST below are stacked images, meaning they are composed of several individual images that were digitally combined to improve detail and sharpness.

Anyway, I guess I've wasted enough of everyone's time talking about it. Let's get to the pictures!

First up, here is the rig in its final form, doing its job. I cobbled together a sun shield for the laptop out of a cardboard box. A laptop cooling pad and ventilation holes in the box kept the computer cool and comfortable. 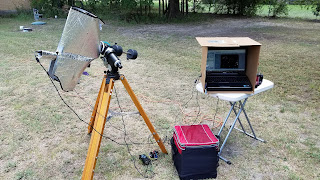 I also made a simple pinhole projector camera. Here, my son is holding the paper while we look at the image. 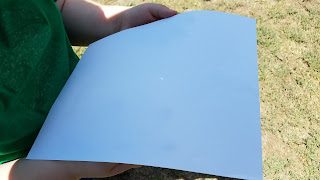 A colander also makes a decent pinhole projector, with an interesting pattern:

This is one of the earliest images that I could obtain due to the clouds: 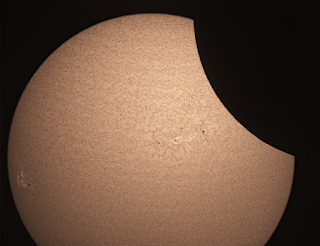 I never found a way to eliminate the Newton rings, or whatever the bands across the Sun are.

Incidentally, I'm using a different shade of yellow now--a little closer to the color of the Sun in my white light filter. (Since I'm using a monochrome camera, the original images are in black and white.)

In this image, sunspot group AR 2176 has been completely covered. 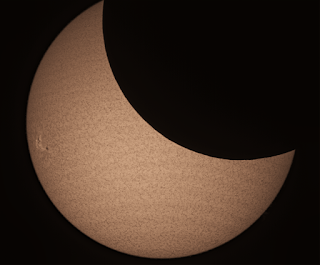 Nearing the peak! The Sun is smiling and has something stuck in its teeth. 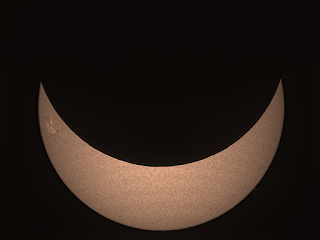 This image is a composite between two exposures taken near the peak: a shorter exposure to get the detail on the Sun's disc, and a longer one to highlight the relatively dimmer prominences (the streams of plasma seen along the outside edges). The two images were combined in Photoshop. Each image is a single shot (not stacked). 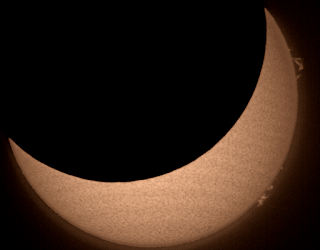 This image was taken a little later, but composed of stacked images. Note the greater detail on the surface and in the prominences. 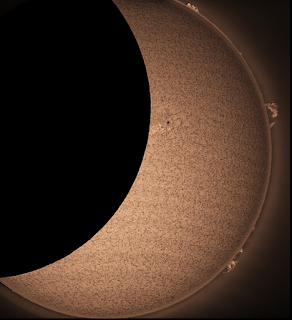 Here, the Moon is almost past the Sun. I somehow managed to accidentally switch the camera to a lower resolution, so this image is smaller than the others.

Other than a small swarm of love bugs, there weren't as many visitors in the images as there were during the Venus Transit. However, a few vultures flew overhead near the end, and one got caught on camera: 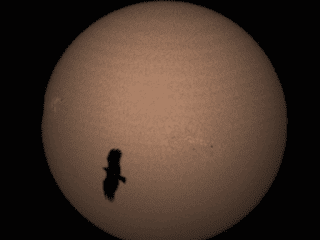 It was a fun day, and I'm glad the weather held out enough to see the majority of the show. The next total solar eclipse in North America will happen in 2024. I can't wait!
Posted by RoryG at 9:20 PM 3 comments:

So, yesterday's test was a success, overall. Today I decided to try to address the banding and temperature issues.

The bands in the previous image are likely Newton's rings, based on what I have read. The Coronado PST reduces the light it receives down to a single wavelength (or pretty close to it). There is probably a misalignment somewhere in the optical train that is causing a reflection. The reflected light bounces around, and since light travels as a wave, the crests and troughs sometimes meet up--crest + crest, trough+trough, and crest+trough--amplifying or cancelling the light. The Wikipedia article probably explains it better.

I attempted to apply a flat field in the hope that it would reduce the effect. It did not work. I have run out of time, so the images tomorrow will just have to be wavy.

The temperature problem, however, may have been solved. I modified an old reflective windshield shade to fit over the scopes and cameras. The temperature inside the shield was almost 30 degrees less (96F) than direct sunlight (125F). The ambient temperature at the time was 96F.

I spend a great deal of time (and frustration) trying to mount the ST80 and PST together, like I did back during the Venus Transit. A problem that I had then, that I was attempting to solve this afternoon, was that the two scopes do not line up perfectly. The Sun will be visible in one, but either out of view or on the edge of view in the other. Unfortunately, despite a couple of frustrating hours working on it, I was unable to solve this problem.

My priority will be on the PST images, with a few white light images here and there.

Now, on to the pictures!

Here are the two scopes on the mount with their heat shield: 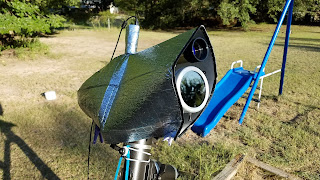 It was getting late by the time I finished with everything else and started testing the rig. So, I only had time for a few shots before the Sun went behind a tree. Below is a composite image that combines the surface with some prominences that were visible on the solar limb. The original images were monochrome (black and white). I colorized them since, you know, the Sun is supposed to be yellow.


And, finally, here is a white light test image taken with the ST80:

Enjoy tomorrow's eclipse, and wish me luck!
Posted by RoryG at 5:54 PM No comments:

Below is an image of the Sun from a test run using the Mallincam SkyRaider on a Coronado PST. Even though this scope is not specifically designed for photography, it worked well with the SkyRaider.

I don't know what is causing the banding across the image, though...

I found out that the bands in the image are called Newton's rings, which are caused by interference patterns in monochromatic light. They are very common in narrow band imaging with these types of cameras. If I have time tomorrow I will experiment with some techniques I read about to eliminate or reduce them. 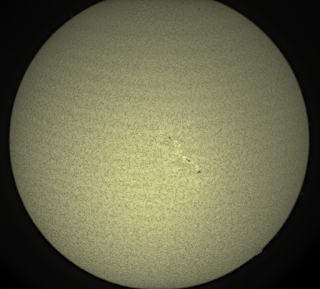 Here is a close-up (slightly enlarged) of AR 2671, the sunspot region visible near the center. 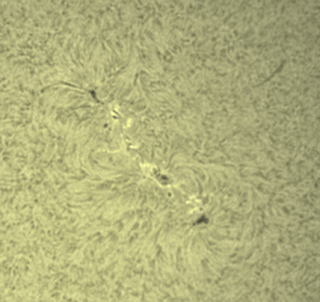