The much anticipated "Christmas Star" conjunction occurred on December 21, 2020. It was visible here at the ObservaRory for a few hours after sunset as clouds moved in and out. My wife and I got to share it with a few neighbors--social distancing was also observed! It was a real Dobsonian event!

To me, the best part of these sorts of things is that it sparks public interest in what is going on above. So many people never seem to look up, but who can really blame them? There is not much to see in the light-polluted skies where most people live.

The downside of these well-publicized events, though, is that they tend to be sensationalized and made out to be something that they are not. For example, a few people were expecting to see a bright star shining down on them like something out of a Christmas movie. The reality was considerably less spectacular, and difficult for some to even identify. Ironically, some people mistook Mars for the Christmas Star because it was more prominent in the sky.

But that aside, this was an event that none of us will see again in our lifetimes.

Planetary conjunctions are not that uncommon an occurrence. What made this one special was the apparent proximity of Jupiter and Saturn--it is not often one can fit two planets in the same field of view in a telescope. Objects in the sky have no variation in distance to the naked eye, so even though both planets are physically millions of miles apart, they appeared to be on a collision course from here on Earth. It is an out-of-the-ordinary thing to those who pay attention to the movement of the planets, but probably of little or no interest to individuals who keep their focus elsewhere.

OK, enough of my rambling thoughts. Let's get to some pictures.

My scopes are not well-suited for planetary imaging. An experiment that I performed the night before the event yielded disappointing results, so the night of the conjunction I decided to try using a 2X Barlow lens to magnify the scene and reduce the overall brightness. I think it worked out well considering the less-than-ideal circumstances. The Mallincam camera is monochrome, by the way, so none of these images are in color.
I was very happy that the camera picked up cloud bands in Jupiter's atmosphere. The contrast has been boosted but is still very poor because Saturn was not nearly as bright as Jupiter. To the left of Jupiter, and barely visible, are its moons Callisto and Io. Europa is to the right.


I slewed over to Mars on a whim, not thinking that I would see much. But, to my surprise, the image results were actually pretty good! I wish now that I had made the attempt to image Mars during the last opposition. I did not write down the number of frames that were stacked, but it was probably more than 100. This image has been enlarged.


How could I not take some pictures of the moon?

Those very few of you who follow this blog have probably noted my general absence over the past few years. Since the passing of my son, Patrick, my interest in hobbies has waned significantly. I feel, though, that I am starting to turn a corner. With the winter constellations now here, I hope to get back into imaging.

While experimenting with imaging the Jupiter/Saturn conjunction, I paused for a moment for a quick stacked image of the moon:

Comet NEOWISE has been giving much of the northern hemisphere quite a show these past few weeks. Based on the photos I've seen it looked to be bright and quite spectacular--maybe a couple of notches above the spectacle of C/2011 L4 PANSTARRS back in March 2013.

But, alas, I live in East Texas.

This time of year any day can be a combination of clear skies with burning sun and 100+ degree F temperatures, clouds, severe thunderstorms, high humidity, and dusty haze. In general, conditions are not often favorable in the summer for astronomy.

A friend of mine and I have been eagerly searching for NEOWISE this past week, but for various reasons we were unable to see it. The evening of July 18, 2020, however, he and I found a dark spot in my neighborhood with a clear view to the northwest. About half an hour after sunset and shortly after a pass of the International Space Station, we finally saw the comet through binoculars.

It was behind some clouds that were lit up from underneath by the lights of a few nearby prisons.  Several minutes later it was naked-eye visible as a faint smudge pointing up toward the Big Dipper. I took several images with my mobile phone and DSLR:

The above image is a single photo taken with my phone. I'm amazed at what these little devices can do!

The two following images were taken with the Canon EOS Rebel T3 (1100D), stacked in Deep Sky Stacker, and have been processed in Photoshop to bring out the details and colors of the scene:

The first DSLR image is from earlier in the evening. The second was from the last series of shots that had decent data before the comet descended too far into the clouds and haze.

Weather permitting, I intend to try for a few more shots of the comet before it fades away. The latest forecast, though, has a tropical disturbance heading into the Gulf of Mexico, possibly for the Texas coast. So, there's that. Ah, Texas... 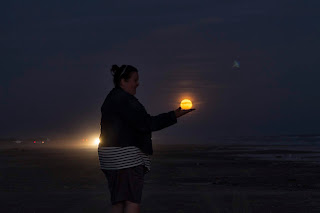 Since the death of our younger son, Patrick, my wife and I have been working to establish a "new normal." If you have ever suddenly lost someone close, especially a child, then you will understand that this is a difficult process--particularly around landmark days like birthdays and holidays. One of the keys that we have found to dealing with our grief is to simply stay busy and occupy ourselves. We have been searching for peace and a new "happy place," which we have lately found at the beach.

We visited Matagorda Beach the day after Thanksgiving and stayed a while after sunset to watch the moonrise. I have been wanting to catch a moonrise close to the horizon for quite a while, and this was the best opportunity. So, without further ado, here are some shots from that evening, in honor of our beloved Patrick, who loved the Moon: 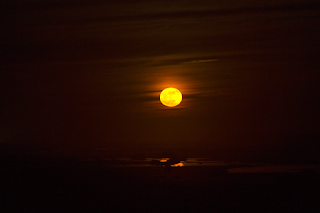 All of the images were taken with a Canon EOS Rebel T3 (1100D) mounted on a tripod and using an EF75-300mm f/4-5.6 USM lens. The images were processed in Adobe Photoshop CS6 using the Nik Collection.
Posted by RoryG at 4:00 PM No comments:

Some online friends of my wife registered a star in Patrick's name. It was a very sweet gesture. The registry company sent a folder with a nice certificate, pictured below, describing the star's location. They also included a star chart that highlighted the star and gave its official designation (more on that later). Here is the certificate: 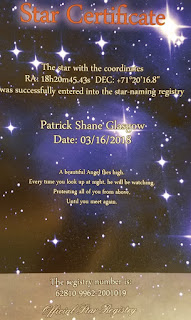 Now keep in mind that none of this is in any way official. The astronomical community is not going to start calling this star "Patrick's Star."

In fact, these registries are a bit misleading. Sure, they create a record for the star name in their database, but it is not officially recognized by any authorities. And there is nothing stopping them or another registry from assigning the star a different name. The company listed above claims that all registered stars are visible to the naked eye. Unfortunately, there are only about 5,000 naked-eye stars, so this practice is not good for business unless each star is assigned to multiple individuals.

Which is OK, as far as I'm concerned, because there is a star in the sky that I will forever think of as Patrick's Star.

That star is officially known as Phi Draconis, 43 Draconis, HD 170000, HIP 89908, among others. It is located in the constellation Draco, which lies between Ursa Minor and Ursa Major. Phi Draconis is actually three separate stars that, at a distance of about 300 light years, appear as a single star to the naked eye.

One clear night recently, I went out and imaged Phi Draconis. The result is below:

Patrick's Star circles the North Celestial Pole. From my latitude, the star never sets. I think that's appropriate.
Posted by RoryG at 11:24 PM No comments:

Email ThisBlogThis!Share to TwitterShare to FacebookShare to Pinterest
Labels: articles, stars of note

Ever since I made the images and video of the ISS solar transit at Huntsville State Park, I have wanted to do the same thing using an H-Alpha solar telescope. The right combination of location, weather, and available time came together on May 6, 2018, so I borrowed a Coronado PST and headed to Davy Crockett Memorial Park in Crockett, Texas.

The transit occurred at 11:27:44 AM, and lasted about six tenths of a second. Considering it took nearly an hour to drive to the site and then almost a half hour to set up, this seemed like a small reward for the effort. But, it was very satisfying to see the space station race across the face of the Sun literally seconds after I had finished setting up and focusing the scope.