Huntsville, a Portal into an Alternate Universe

I think that my hometown of Huntsville, Texas must be at the intersection between our universe and another.  Why do I think this? There are lots of reasons. The purpose of this post is to bring to light some unusual features that I have found around town that have led me to believe that Huntsville is riddled with portals into another reality, which I like to refer to as Universe X

I also believe that things and beings from Universe X sometimes cross over into our universe. The Farrington Building, which is the science building on the campus of Sam Houston State University, appears to be at the epicenter of these strange incursions. I wouldn't be surprised if this was the result of some experiment in interspatial physics that went horribly wrong.

I have seen many strange things in Huntsville--most of them at Walmart.  Below are images of some of these strange features, but be warned: the natural conclusions that one must draw after seeing these images are quite disturbing. I believe that Huntsville--and possibly the entire Earth--may be the target of a full-scale invasion of hideous beings from Universe X!

Located on a wall near the west door of the Farrington Building is this seemingly inconspicuous hole, which is about an inch across. When I discovered it in July 2009 it was spewing forth a cool wind at a prodigious rate.

I think it is a tiny portal into an alien world located in another universe. It must be cold there, or perhaps the seasons are different than here in Huntsville.  I suspect that the lab in which the portal was supposed to be created is on the other side of this wall.  Maybe the scientists who made it were a little off in their calculations, and the portal ended up inside the wall.  At any rate, it appears that the scientists made a couple of unsuccessful exploratory holes before finding the exact spot into the interspatial rift.

Inside the southern stairwell of the Farrington Building is a half-height doorway with these two signs taped to it. The one on the left labels this door as "Doorway to the 4th Dimension." The sign on the right is a list of warnings. Here is a close-up: 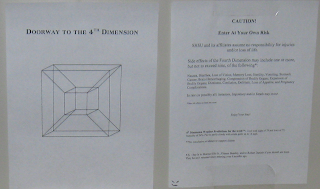 I do not know who put these signs here or when they were placed, but they confirm my belief that something unusual is happening. Someone has obviously taken notice and felt the need to caution others. Three people may have even lost their lives. The door was locked, so I was unable to engage in my own investigation.


This sign has had me baffled for quite some time. It is located in the parking lot next to the Estill Building (which, interestingly, is next door to Farrington). What does "PERM T" mean? Is it a code, or does it perhaps refer to a "visitor" named "Perm T?" And by "visitor" I mean "visitor from another universe." Maybe this is where Perm T, Alien Being from Universe X, parks his car when he visits Earth.

The image above is of part of the main stairwell at the Newton Gresham Library. Ordinarily I wouldn't take much notice of such a mundane object, but after examining this photo I was struck by both the object's symmetry and the repetition of its elements. It seems strangely mesmerizing. I wondered if such a device could be used to induce an hypnotic state in humans, opening their minds up to control by a hostile entity. "Oh, you're just being paranoid," I've told myself. But, then I saw this:


You might be thinking, "Big deal! This is a library, after all."  I mean, we've all been taught to be quiet in the library, right?

Well, think of it this way: if you were a ruthless alien from an another universe and you wanted to control the minds of humans using hypnosis, wouldn't you need quiet for your hypnosis device to work? And where else do humans gather in significant numbers and stay quiet? Certainly not a football stadium! (Although I am convinced that spectator sports are also a form of mind control.)

Plus, look very closely at the image in the lower-right corner of that sign. Do you see anything unusual about it? I do. Here are the things that I see that concern me:

The sign is clearly a coded set of instructions that are delivered to us while we are in a stairwell-induced trance.  In Universe X alien-speak, it reads something like this:  "Sneak up to a human's house, then use the plasma-ray emitters in your fingers--you know, the ones we installed while you were in a trance in the stairwell--to melt the locks and steal their brains.  Then, return those brains to us, your Universe X Masters."

How do I know that aliens are stealing human brains in Huntsville?  Well, there are a lot of mindless people round about town.  I mostly see them at the local Walmart.

By now you probably think that I'm some kind of crackpot. Don't write me off, yet. Like I stated above, others have noticed that something is definitely wrong here in Huntsville. If I'm out of my mind, then I have company. Take a look at this:
This door is located in an office building across town from the university. The text is a very explicit warning that something potentially dreadful lurks on the other side.  What is a "raffic?"  Is it something that pounces fast moving prey? What does it prey on? I am certain that it is a danger to humans, otherwise what would be the point in putting the warning on the door?
My leading theory is that the raffic is a beast from Universe X that has been brought to our universe. It hides in the stairwell behind this door. I bet that the Universe X aliens feed uncooperative humans to the raffic.
I have been through this door (slowly) many times, but have seen nothing particularly unusual. I am very curious though, to know what a raffic looks like so that I may avoid it in the future. My imagination has been in overdrive ever since I saw the warning. I'm pretty certain that a raffic looks something like this:
I think it's something like a sasquatch, except with razor-sharp claws and horrible, pointy teeth. Yes, I'm almost certain that this is what a raffic looks like.

This is all that I dare show you at this time. I suspect that agents of Universe X are on to me. Stay safe, watch out for brainless people at Walmart, and stay clear of the raffic!
Posted by RoryG at 4:00 PM

Email ThisBlogThis!Share to TwitterShare to FacebookShare to Pinterest
Labels: articles