Below is an image that I took of M51 on June 8, 2011. A first-quarter moon was up and the sky was hazy, so the detail isn't that great. The supernova, now designated SN 2011dh, is as bright as many of the foreground stars in this image. Considering that M51 is 23 million light years away, that's pretty bright!

For comparison, here is a shot of M51 that I took with the Epsilon-200 on April 24, 2010, reduced and rotated to approximately the same size and orientation as the image above. 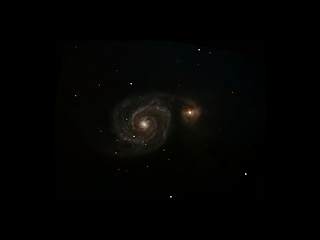 Below is the full-size version of the Epsilon-200 image. The moon was about 85% full that night, but the sky was much clearer than the other night.

SN 2011dh is expected to remain visible for the next few months. It has been determined to be a Type II supernova, which means that it was caused by giant star that collapsed in upon itself. The debris from this star will be scattered into interstellar space and may end up becoming the raw material for new stars and planets. The core of the star likely collapsed into either a neutron star or a black hole.

SN 2011dh is the third supernova observed in M51 in the past 17 years, which is a remarkably high frequency considering that our own galaxy averages only one supernova every 50 years!
Posted by RoryG at 1:31 PM