About 35 million light years away in the Leo constellation lie three galaxies--Messier 65, Messier 66 and NGC 3628. This group is called the Leo Triplet, or the Leo Trio. Each is a spiral galaxy, and each is gravitationally influenced by the other two.

Here is Messier 65. It has a high ratio of old to new stars due to its relatively low quantity of gas and dust. Note the prominent dust lane in the foreground. The star in the middle of the dust lane resides in our own galaxy.

Messier 66 has an unusual shape.  Its spiral arms appear to be bent above the plane of the galaxy, and the nucleus is off-center. This is likely due to its gravitational interaction with its neighbors. Messier 66 is about 95 light years across, which makes it slightly smaller than the Milky Way.


The faintest of the three galaxies is NGC 3628. It is seen edge-on. The outer edges are distorted as a result of the gravitational influences of Messier 65 and Messier 66.
The Leo Triplet can be easily viewed in a 6-inch telescope (and in some smaller scopes) in clear, dark skies. It is likely that Charles Messier's equipment was not sensitive enough to detect NGC 3628, which explains why it was not cataloged along with its neighbors. 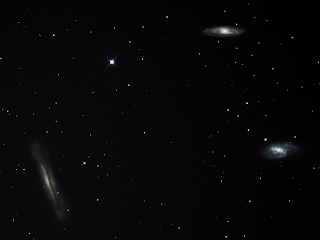