This is the second in a short series of articles on removing the effects of chromatic aberration (CA) from DSLR astroimages. This article describes a process for desaturating (i.e., "whitening") the halos around stars using a color layer in Photoshop or GIMP. Removal of CA from lunar images will also be discussed.

I came across a tutorial on YouTube for removing CA from images using Photoshop. This technique works well for eliminating or reducing purple fringes.  Here is the video:

Nicole points out that the effect can be controlled by adding an image mask. In the case of deep sky astroimages, a mask would be used for applying the layer to individual stars.

This technique works well in Photoshop unless the halos are very bright. I have only had limited success with it in GIMP. This may be due to GIMP's color-depth limitations, or perhaps Photoshop uses a better algorithm. This article will demonstrate the process in GIMP, however, for those who do not have Photoshop.

Here is a partially processed image of the central region of Messier 7, taken with my Canon EOS Rebel T3 (1100D) on the Orion ShortTube 80 achromatic refractor.  The image is a stack of eight 60-second exposures at ISO-800.

Duplicate the layer (Shift+Ctrl+D) and apply a Gaussian blur (Filters -> Blur -> Gaussian Blur...). Set the radius as you see fit. I used 30 pixels since the halos in this image are fairly large. 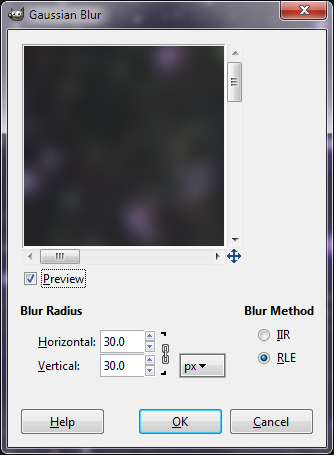 The second layer should look something like the following: 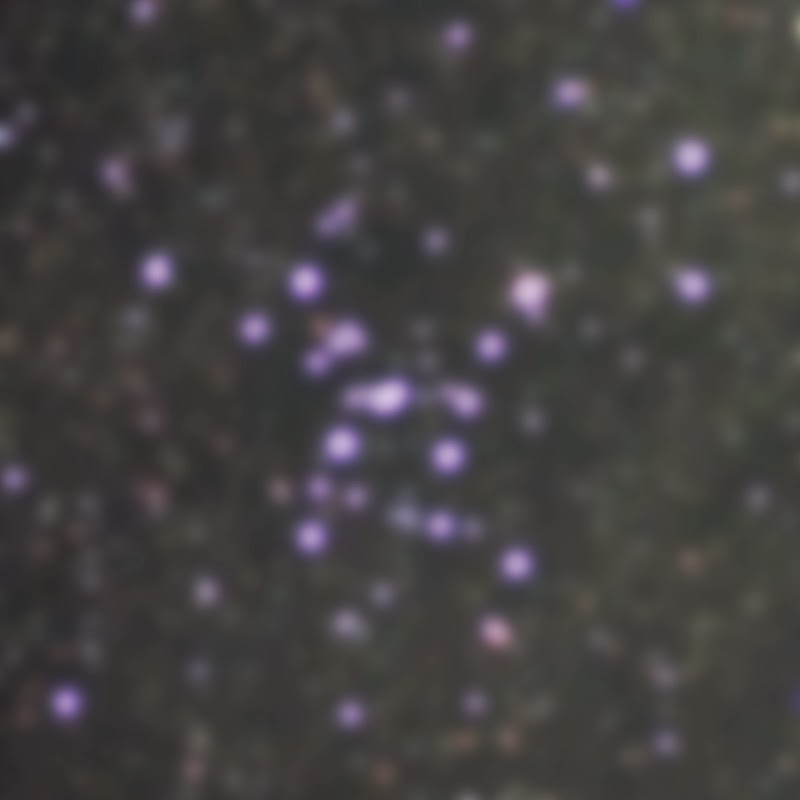 Next, set the layer mode to "Color" from the drop-down list in the Layers tab. The halos will be desaturated, but so may the rest of the image. In addition, faint blue halos may still exist around the brighter stars. 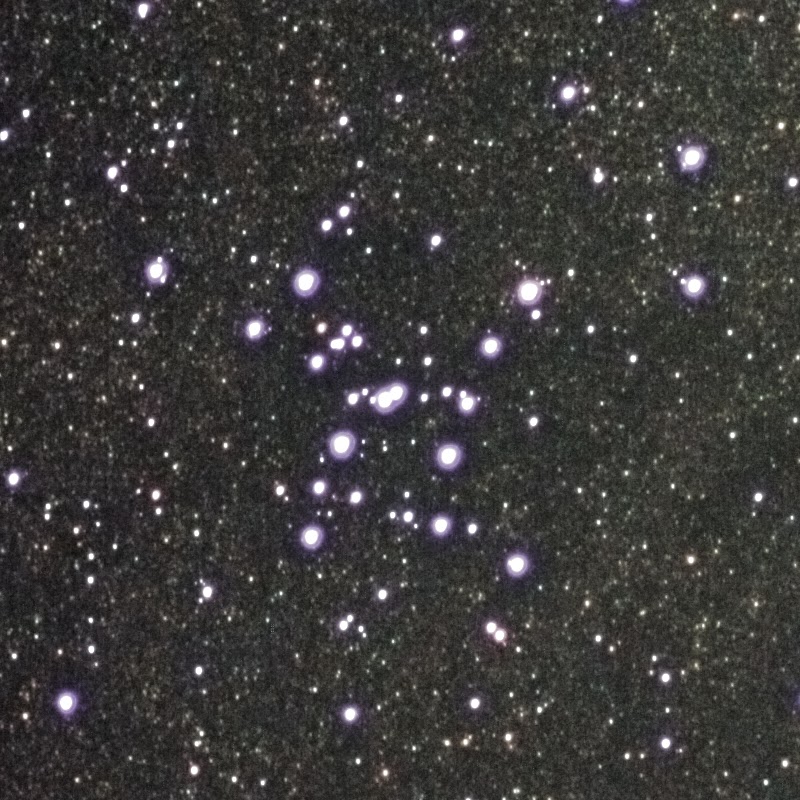 The layer mask will confine the effect to the stars. To create a layer mask, right-click on the layer in Layers tab and select "Add Layer Mask..." from the context menu: 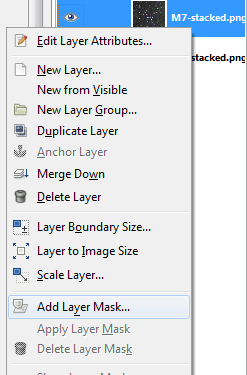 The Add Layer Mask dialog will be displayed. Select "Black (full transparency)" from the radio button list and then click Add. 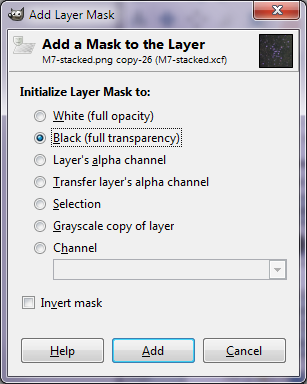 Select the layer mask on the top layer by clicking the black square next to the thumbnail image. There are several ways to edit the layer, but probably the easiest is to select a paint brush and set the foreground color to white. I prefer to use a brush with 100% hardness. The image below demonstrates the effect of the layer and mask. The circled area is the area painted white in the mask. Note how the star lacks the pink ring and that the purple halo is less intense. 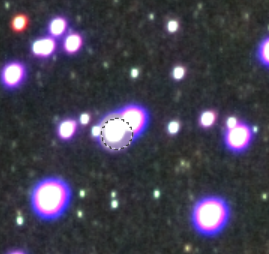 This image shows the result of the finished mask: 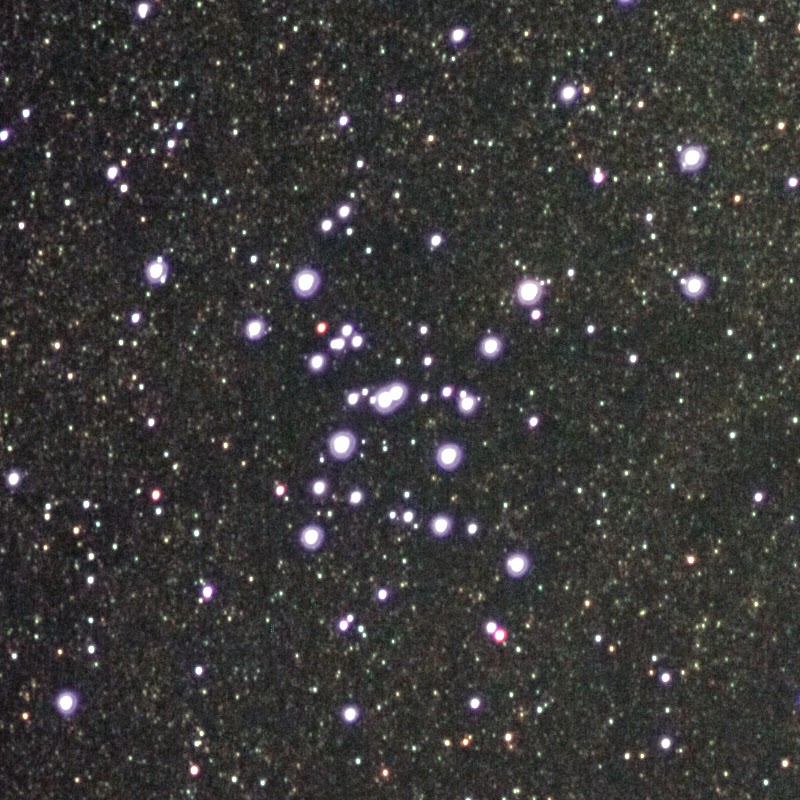 The halos are still a little too purple for my taste. This can be easily fixed by decreasing the saturation of the layer image. Select the image thumbnail on the top layer and do one of the following: 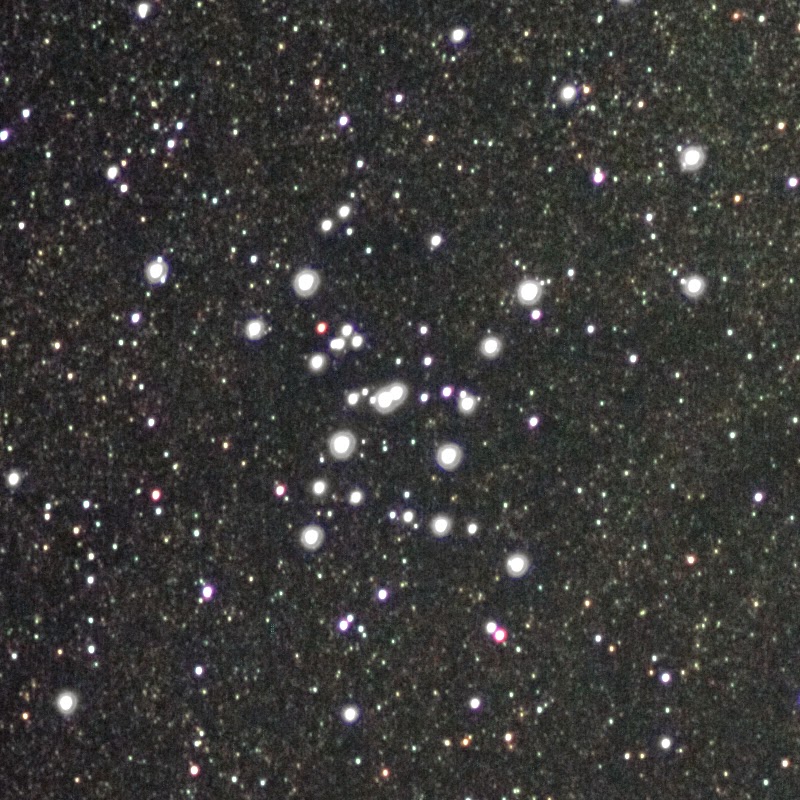 Granted, this doesn't rival an image obtained by an apochromatic refractor or some kind of reflector telescope, but the result looks a little more natural that it did before processing.

The color layer method works well for lunar images, too. Examine this close-up of a slightly over-exposed image of the Moon. Note the purple fringes around the crater rims and along the lunar limb:

And here is the same image with the color layer applied with a 15-pixel Gaussian blur:

Bonus image! Here is the Messier 7 image processed in Photoshop using the color layer method. The subs were taken on a bright, moonlit night over the light dome of a nearby town. Not bad for a little achromat refractor, in my opinion!

The next article describes my preferred method for removing halos in GIMP.
Posted by RoryG at 7:54 PM