What color is the Moon?

To the naked eye it appears as shades of gray, but, there are subtle color variations across its surface.

The Moon's colors are a good indicator of its mineral composition.  The blue and orange areas are basalt.  The blue areas have a higher concentration of titanium.  Color variations in and around craters give clues to the minerals that are present below the surface.

Early astronomers mistook the large, dark areas on the Moon's surface as bodies of water.  Johannes Kepler named them maria, which is Latin for "seas."  They are actually lava plains that formed during the Moon's volcanic past.

The lighter areas are the highlands, named terrae (earth) by Kepler.  The highlands are heavily cratered, and are older than the maria.

Here is the original image: 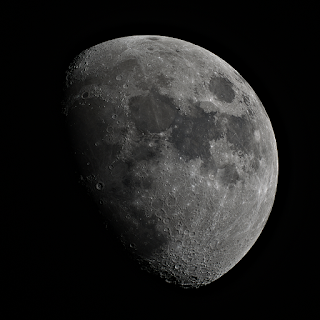