Open clusters (also called galactic clusters) are groups of stars that formed from the same cloud of gas and dust. Over time, gravitational interactions among cluster stars spread them throughout the galactic neighborhood. Open clusters are mostly composed of young, bright stars. It is believed that the Sun formed in an open cluster that dispersed long ago.

Sometimes open clusters appear in pairs or groups in our sky. The Double Cluster in Perseus is the most famous of these, partly because the two clusters are actually close to one another in space. Other groupings are simply chance alignments, with one cluster being significantly further than the other.

One such grouping is Messier 35 and NGC 2158 in Gemini. NGC 2158 was once thought to be a globular cluster, which is actually sort of satellite galaxy that orbits large galaxies like our own. It was eventually determined to be an unusually dense open cluster located much further away than Messier 35.

The constellation Auriga contains several bright open clusters and many smaller ones. Messier 38 and NGC 1907 make a nice double:

Here is a wider-angle shot of the area around Messier 38 that also includes Messier 36 and two nebulae: 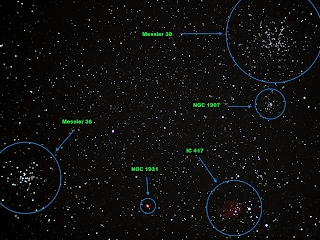 Another interesting pair is Messier 46 and Messier 47 in Puppis. Planetary nebula NGC 2438 appears to be part of Messier 46, but in reality it is between us and the cluster. The image below also contains two smaller open clusters cataloged as NGC 2423 and NGC 2425 (see the labeled image, further down).

I call the image above my Open Cluster Family Portrait.  Messier 46 is the mother (she's wearing a pretty planetary nebula as jewelry), Messier 47 is the father, and the two other clusters are the children.  Here is a labeled version: